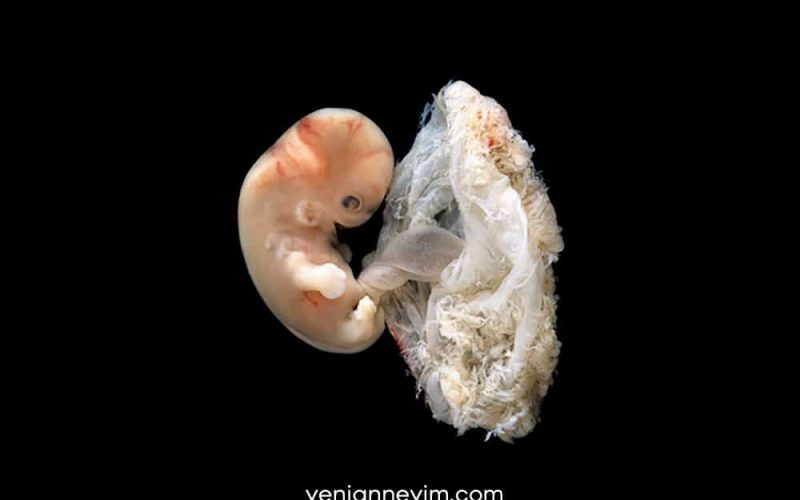 “Alaq” is the Arabic word referring to something that is hanging on a place. Thanks to modern science and apparatuses we learned that during the early weeks of the pregnancy, embryo hangs to the mother’s womb.

Embryology did not exist as a science at the time of the Prophet. Neither was there special terminology yet. The Quran described the stages using the words current at the time and formed its own terminology.

The Quran brings clarification to something unknown at the time by this definition. The Quran describes “the hanging” stage that is relevant to our creation. To translate the word “alaq” as embryo may not exactly reflect its original meaning and would fail to convey the spirit of it. On the other hand to translate it as “a clot of blood” also deviates from the literal meaning of the word. The mistranslations of the word “alaq” was due to failure to concieve the true meaning of the word.

In 1641, Harvey’s statement, according to which the origin of every living thing was an egg, and saying that the embryo underwent transformations, passing through stages of development, was one of the major contributions to the advancement of science. In the 17th century, when man already had the microscope at his disposal, the respective roles of the egg and of the sperm were topics of discussion.

Keith Moore, anatomy professor at the Toronto University of Canada, says that the information contained in the Quran about embryology cannot be accounted for by the data available in the 7th century. He goes further and says that, even a century back, this was hardly known. Only today are we in a position to understand what the verses of the Quran meant, thanks to the development of modern embryology.

In history, the only book that exactly describes the development of the human being within the womb is the Quran. Let us once again tackle the subject of hanging to the uterine wall. Only after the invention of the microscope was man able to bring this fact to light as a result of developments in the fields of physiology, anatomy and embryology.

PROOFS FROM THE STAGES OF THE EMBRYO

6- These are the signs of God which We rehearse to you in truth.
Then in which word other than God and His signs do they believe?
(45-The Kneeling, 6)

The sperm that encounters its other half in the fallopian tube continues its way from there toward the womb. The embryo, in its journey, does not cling on to the fallopian tube. The embryo proceeds on, and when it reaches the womb hangs onto a spot where the blood vessels are dense. So the stage of “alaq” referred in the Quran has started.

How is it that this powerless cell devoid of all intelligence eventually finds for itself a shelter in the womb, the ideal place for it? How is it that the embryo that arrives at the womb hangs on its wall and is able to receive all the nourishment necessary for its development, like a leech? (One of the meanings of the word “alaq” is “leech.”) All these things are carefully planned by God’s ingenious artistry. Those who are blind to this fact and refuse to see in this God’s doing, interpreting it as pure coincidence or the embryo’s genius, will be in a ridiculous situation.

The process of the embryo hanging on the uterine wall is the result of a complicated system. To penetrate the acid layer of the uterine wall, the embryo secretes an enzyme (hyaluronidase) that catalyzes the uterine tissue and allows the penetration of the embryo, which settles in it like a plant. Henceforth, it will supply its need for food and oxygen from this very point. The hyaluronidase secreted by the embryo catalyzes the breakdown of the hyaluronic acid. Furthermore, the embryo releases some chemicals to protect itself from the mother’s immune system, which would otherwise treat the embryo as a foreign invader to be destroyed.

The embryo’s discovery of the place where it is going to hang is a marvel. The embryonic cells have so many activities to perform that a scientist who studies them can easily come to the conclusion that they are entities of high intelligence.

1 Reply to “HANGING ON THE WALL OF WOMB”