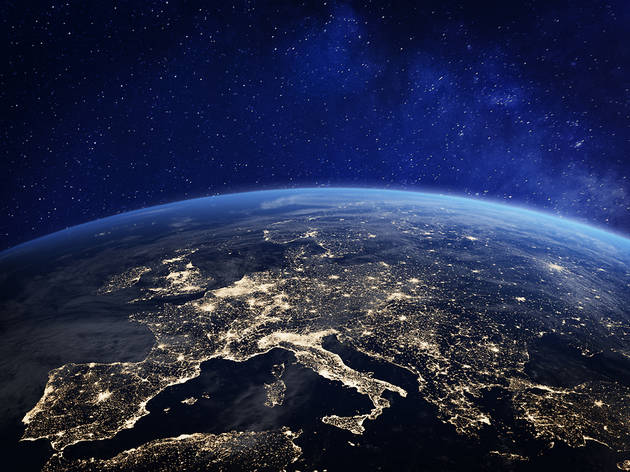 88- When you look at the mountains, you think that they are standing still.
But they are moving like clouds. Such is the artistry of God,
who disposes of all things in perfect order.
He is indeed fully aware of what you do.
(27- The Ant, 88)

The mountains’ features seem to make them the most stationary components of the earth’s surface. The idea of the unattainability of mountains led certain primitive mentalities to believe in polytheism and fancy that the mountains were the abode of divinities.

The idea of mountain peaks being beyond man’s reach was an illusion, as was also their stationary aspect. The verse refers to this illusion and speaks of the motion of mountains like clouds. If the mountains that had a stationary aspect did move, it would follow that the earth itself also moved. The verse thus dismisses the idea of a fixed world entertained as a consequence of false perception, and informed the public of the time of the movement of mountains, likening them to clouds.

This sign, beyond the grasp of the public contemporary with the Prophet, led people to believe that it was a premonitory sign foretelling the end of the world. Even someone who had no knowledge of the Arabic language could see that this interpretation was groundless and conflicting with the Quran. In the verse it is stated that men believe that the mountains are stationary, but this is an illusion. It is impossible to deduce from the mountains in motion that this is to take place at the end of the world.

WHAT WOULD HAPPEN IF THE EARTH DID ROTATE?

These false assumptions deduced during the first century after the Prophet may be condoned after we read the commentaries of Sheikh Abdul Aziz Bin Baz from Saudi Arabia. As late as the 1970s, he claimed that the earth did not move and that anyone who asserted the contrary was considered to have committed a blasphemy. The Saudi Sheikh spoke as follows: “Anyone who thinks otherwise would be considered to have gone astray and be called on to repent. If he does repent, so much the better, if not, he will be declared to have uttered a blasphemy and be put to death, his estate being forfeited by the treasury of the Muslim State. If the earth rotated as they asserted, lands, mountains, trees, rivers and seas would turn into an absolute chaos. The Western lands would have changed directions and shifted to the East. And the Eastern lands would shift to the West changing the direction of the Kibla (Mecca), henceforth impossible to determine. As none of these happenings are observed, the assertion that the world is in motion is a false statement for many reasons.”

We see that the opinions entertained about the stationary character of the earth were so firm that bigoted theologians disregarding the revelations of the Quran could utter that anyone who thought that the earth moved had to be subjected to capital punishment in the twentieth century! The Quran is full of miraculous revelations, but there is no end to the lies concocted in the name of religion. The people who took as their guide such concoctions and merely read the Quran as a textbook without understanding its meaning have done the greatest harm to religion. One must understand the reliability of the Quran and avoid all superstitions.

Though historically it is a rare and anecdotal reaction and not shared by many Muslim scholars, we mentioned the bigoted reaction of a scholar who railed against the idea of a rotating earth. The case of Galileo, however, is known all over the world. Galileo was an Italian astronomer and physicist, one of the founders of modern science; he believed that the universe was created by God. His empirical and observational scientific approach enabled him to be a pioneer in many fields of science. His ordeal is well known. His postulation that the earth rotated caused him to undergo terrible and painful experiences. The Church had adopted the views of Aristotle and Ptolemy on the universe and the world. This conception posited that the earth remained fixed while the sun revolved around the earth. The Church adopted this earth-centered view as its official credo. The Church propounded all its views as the reflection of God’s will; to oppose them was equal to taking a stand against God. We witness once more that one of the main sources of commentaries trying to show that religion and science are mutually exclusive were ignorant dogmatic bigots and the religious establishments under their domination. So has been the case with Islam.

Once man ceases to mix his own ideas with God’s, the problem will be solved. Otherwise, man will continue committing the sin of mixing his views with God’s revelations. Galileo Galilei, like Copernicus and Kepler, argued that the earth moved and the sun stood in the center. According to their contention, the earth had no central position. The Church was not as tolerant as it had been in the case of Copernicus and Kepler. Galileo’s adoption of the Copernican system was refuted by the Church, and under threat of torture from the Inquisition, he was forced to publicly recant his heretical views. This was not the end of the ordeal; he still had to face material and spiritual tortures. He was forced to spend the last eight years of his life under house arrest. The story of the Church and Galilei illustrates best the quarrel between “religion” and science. But the fact remains that the original religion as such was not to blame, but the so-called representatives of fabricated religion were. The Quran warns us against those people who will show up and present themselves as spokesmen of God’s religion as well as against the things they do for material gains.

34- O believers, many rabbis and priests devour the substance of men and hinder them from the way of God…
(9- Repentance, 34)

We must beware of the class of the unenlightened and opportunistic who call themselves representatives of religion. True enlightenment is possible only by guiding ourselves by the precepts of the Quran. To adopt the Quran as our guide is the remedy against superstitions and the sine qua non of coming face to face with the truth.

The verse we are studying in this chapter may have another sign, as well. The terrestrial crust moves as if floating on the mantle, which is denser. This was the reason why the continents, once a whole, were severed from each other. The ideas posited by German meteorologist and geologist Alfred Wegener in an article published in 1915 made him the first serious proponent of the theory of the continental drift. His theory was not espoused by most geologists of his time. It is, however, accepted now as correct in principle. The continental drift is the concept of continent formation by the fragmentation and movement of masses of land on the surface of the earth. The seas and lands are in collision with each other like floating rafts on a lake, sometime overlapping each other. This movement vary between 3 cm and 15 cm per year. Thus, the mountains, that appear stationary to us, are in fact in motion along with the earth, as well as with the continent of which they form a part.

The world we inhabit rotates around its axis and revolves about the sun in its rapid course in space along with the solar system; in addition, we must take into account the world’s movement in relation to the moon. We shall include also the gravitational force of other planets. Unconscious of all these phenomena, we sleep tightly, enjoy our meals with relish, and take pleasure in reading and doing sports. A car is considered super when it does not let us feel we are riding in it. Our world travels at an immense speed and follows extremely complex courses unpiloted, without our being consciously affected by them. The verse we analyzed at the beginning of this chapter is an evidence of the incontestable perfection of God’s design.

Tags: Galileo, Motion of the mountains, The earth rotates, featured