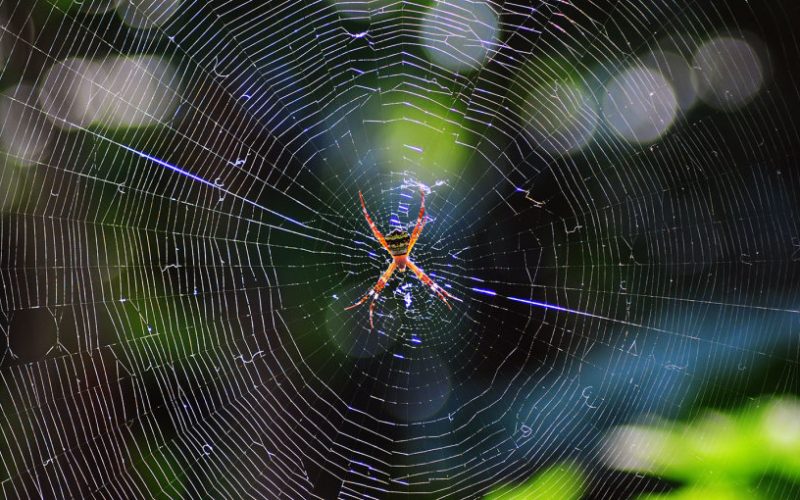 41- The example of those who take allies other than God is like that
of the spider who takes a home. And indeed, the weakest of homes
is the home of the spider, if they only knew.
(29-The Spider, 41)

In the verse, the word “ankebut” refers to the female spider. Since the suffixes for female and male verbs are different in Arabic, a female suffix to the verb “ittehazet” also shows that the word is referring to a female. But unfortunately some translators do not give enough attention to this difference and they translate the “female spider” as “spider.”

The research studies conducted on animals present very interesting findings regarding spiders. First of all, it is the female spider that spins the web. Even though male spiders spin the web in their early years, it is mainly the female spiders that build the web.

Moreover, the evidence compiled on spiders proves why the Quran calls the female spider’s home as the “most unreliable home.” Directly after copulation, the female spider eats up her male. The female spider’s home is unreliable both for her mate and for others. Usually all the living creatures erect their homes so as to be protected from inclement weather conditions, from their enemies, and from any and all other dangers. But spiders build their homes in order to destroy, to harm, and even to eat up the trespassers. That is why the most unreliable home is the spider’s. If the male spider is not lucky enough to run away right after intercourse, the female’s home becomes his grave.

EVEN THE SUFFIX IS A MIRACLE

Even a female suffix used in the Quran for the spider presents a miracle. The Quran shows its miracle by stating that the universe is expanding, by saying that there is a well-protected roof over the earth, by referring to internal waves in the seas and by showing the difference between the male and female spiders. The Quran, by giving details in such different subjects, has never made any mistake and, on the contrary, has presented miracles for the ones whose eyes and hearts have not been blinded.

In the time of our Prophet, it was not yet possible for one to know that the universe is expanding, or that there are inter-waves under the seas, or that there is a difference between what the female and male spiders do. And moreover, it is more impossible to present details in such different issues in one book. Since it is the same source that reveals the Quran and that expands the universe, forms the seas, creates the nature with its bees and spiders, it is not very hard to see that that source knows all of these 1400 years ago; this is not very difficult for the believers to understand.

All of these prove that the Quran’s claim “It is God who reveals the Quran and who creates the Universe” is such a true statement.

1- Alif, Lam, Ra. This is a Book which We have revealed to you, that you might bring mankind out of darkness into the light by permission of their Lord – to the path of the Exalted in Might, the Praiseworthy –
(14-Abraham, 1)

BEWARE OF THE FAKE ALLY

“Awliya” is the word used for “allies” in Arabic and it is the plural of the Arabic word “wali” (ally). The verse below warns us about the ones who forget about God and who make allies (awliya) other than God. The people who harbor with others than God are doomed to be destroyed like the ones who take refuge in a spider web. The female spider even ruthlessly kills a mate that approaches her in a very amicable way. Allies other than God are likened to the female spider because they destroy the ones who harbor them in the same way.

The spider web is so weak that it can be destroyed with a small touch, but the thread used to build that home is miraculous. Manufactures of steel vests are trying to duplicate these spider threads because those threads are stronger and more durable than steel of the same thickness. The spiders use the threads in various ways. It is being discovered that some spiders even use those threads as parachutes and can drift away about 350 km. There are some spiders that throw their nets to catch their prey and some spiders catch fish on the surface of water with the help of their nets. Whoever studies the spiders see that these small creatures demonstrate creational miracles, as do all other creatures.

It is very interesting that a spider web constructed of the strongest raw material is at the same time so delicate that it can be destroyed with a slight touch and that this spider web is the least reliable one among all homes. This home represents paradoxes because fellow creatures kill each other by the help of this home.

It is very contradictory for man to search for a harbor other than with God, whoever or whatever those harbors shall be. Everything is in the control of God but man who is created by God still looks for allies other than God. What disasters allies (awliya) can cause other than God is presented in the sura “The Spider” with a marvelous simile. Below is another verse which warns us against taking allies other than God:

3- Follow what has been revealed to you from your Lord and do not follow other than Him any allies. Little do you remember.
(7-The Purgatory, 3)