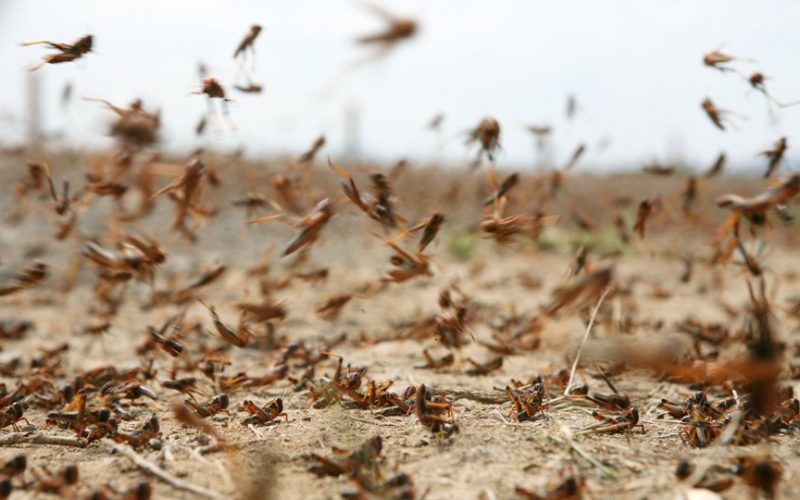 7- They will come out of the graves with downcast
eyes like an expanding swarm of locusts.
(54- The Moon, 7)

In the verse above, unbelievers are reminded that they will be resurrected and that it will be a difficult day for them. Imagine, billions of men rising from the dead, coming out of their graves! Confusion, perplexity, fear, remorse… Everybody on his own… The only help is from God. The day when high offices, families, riches and possessions have no value on the day of no return…

The resurrected are likened to locusts; why particularly locusts? Recent research benefiting from micro cameras conducted by a systematic observation of insects have given us an idea about the reason for the selection of locusts as an example. To begin with, swarms of locusts, billions of them together, give the impression of a vast rain cloud without end, a black mass stretching far and wide 3 to 5 kilometers! Locusts bury their eggs in the earth and their larvae spend some time under the ground before they eventually emerge to the surface.

Take for instance the locusts, part of the fauna of New England, USA; in the month of May of the year in which they attain their 17th year, these insects emerge from under the ground where they have been living for years and years. Suppose, you tell a man: “We’ll shut you up in a dark cell without a wristwatch and you’ll have no contact whatsoever with the outside world and you’ll be released at the end of the 17th day.” It is very doubtful that he will be able to know exactly the time when he will be let out. There is a similarity between the rebirth of locusts and man’s resurrection.

– After a long time

– They rise to the surface of the earth

The parables and metaphors in the Quran are many. These figures of speech are to help us to understand better the meanings of the verses.

43- And such are the parables We set forth for the people,
but only those understand them who have knowledge.
(29- The Spider, 43)

27- We have put forth for the people every kind of parable
in this Quran that they may take heed.

A great deal of space is reserved for the description of life in Hereafter in the Quran. Next to the existence of God, the most important message is that there is an afterlife and that man will receive recompense or retribution there. 1400 years ago, the Quran elaborated on physics, embryology, geology and zoology. There was no inaccuracy or misreckoning in any of the information supplied in it. Everything is perfectly expressed in the most unambiguous way.

The greatest claim of the Quran is the declaration of God’s existence and the fact that no partner should be attributed to Him. The Quran reflects the Omnipotence and Omniscience and Artistry of God: the One, the Eternal and the Absolute. The messages it contains enables masses of people to choose the right path, the path of the chosen. It has saved many people from perdition, idolatry and atheism while confirming the Scriptures and prophets that preceded it. In short, those who comprehend the importance of the question whether God exists or not, will also appreciate the importance of the Quran, since it provides a conclusive answer to that question:

1. The Quran’s most important message is God’s uniqueness and oneness. The Quran has guided millions of people in the right path.

2. The predictions it contains have no precedent. This very fact proves that its original source is God, and confirms that its messages are true.

The evidence of a life after death or a Hereafter are many. One of the main signs is man’s aspiration for immortality. God has provided water for the thirsty and food for the hungry. If He did not want to give, then He would not have given the desire to want. It is again He who has created in man the aspiration for immortality. Since He has done so, His promise shall be fulfilled. God’s promise is sure to be gratified.

The most important and self-contained evidence of the existence of the Hereafter is God’s promise. Is it possible that God would disappoint the believers who trust God, dedicate themselves to God and seek the Hereafter in their actions, while justifying disbelievers who deny the Hereafter, who disregard His messages, who fabricate lies about Him and mock those who are in the right path? Lies are a proof of imperfection, while everything is perfect with God.

Both during the Prophet’s time and thereafter there have been doubts about the possibility of the end of the universe and of the Hereafter. The Quran is categorical and explicit about this.

Creation of a life in the Hereafter is the easiest thing for God. To begin with, it is His promise. The very fact of creation should convince us that re-creation is not difficult for Him.

The Hereafter is not a problem for God. In the first place, it has been promised by God. Moreover, we all have need of it. The Hereafter is repeatedly emphasized in the Quran. And it is clear that creation is a very simple act for God.

God has recorded even in a single DNA molecule all the information related to the human body. While the Quran gives us an impression of an afterlife through creation, it directs our attention to the process to which God had recourse in creating us. The cells in our body die and are immediately replaced by new ones. Today, the cells that constitute our body are not the same as those we were made of initially. The food we consume is continually transformed into a part of our system. The atoms of carbon, hydrogen, nitrogen, oxygen, and phosphorus flow in our body and are consumed, to finally return to dust. God creates us every moment anew. Since He has promised to re-create us there is no doubt that He will.

33- Do they not realize that God, Who created the heavens and
the earth and did not tire creating them, is able to revive the dead?
Yes, verily He has power over all things.
(46- The Dunes, 33)

Creations in endless space, the greatness in the number of species and creatures make it evident that re-creation for God is as easy as the creation.

LET’S GET READY TO DEPART

There are many subjects explicitly given in the Quran; however, the things that our five senses may fail to perceive are presented in metaphors (3-The Family of Imran, 7). In the description of paradise and hell, allegory is made to figures of speech (2-The Cow, 25). Blessings and rewards in the life Hereafter are described succinctly by metaphors. The exact rendering of the objects will take place when man is transferred there. Allegories made must not be taken fully literally. Bliss in heaven and remorse in hell are evident, although they will be understood in the Hereafter more clearly.

The scope of the account related to the Hereafter is far beyond what is said about paradise and hell. The description of a single province like the Bahamas would take a whole book thicker than the Quran itself. Had all the details of paradise and hell been given, they would have filled an encyclopedia of many volumes. Only the clues are given. The fact that only a few names of some fruits are mentioned does not mean that is all that paradise contains. The mere mention of the fact that everything that a human being may aspire to shall be there is enough (21-The Prophets, 102; 42-Consultation, 22; 43-Vanity, 71; 50-Qaf, 35.) In this brief earthly life of ours, the wisest act for us is to direct ourselves to God.

185- Every soul shall have to taste death, and you will get your recompense in full on the Day of The Resurrection. The one who is saved from the fire and admitted to paradise has attained a great triumph. The life of this world is no more than goods and chattels of deception.
(3- The Family of Imran, 185)

7- Those who disbelieved claim that they will not be resurrected! Yes indeed, by my Lord, you will be resurrected, and then informed of what you have done. And that is easy for God.
(64- Mutual Blaming, 7)