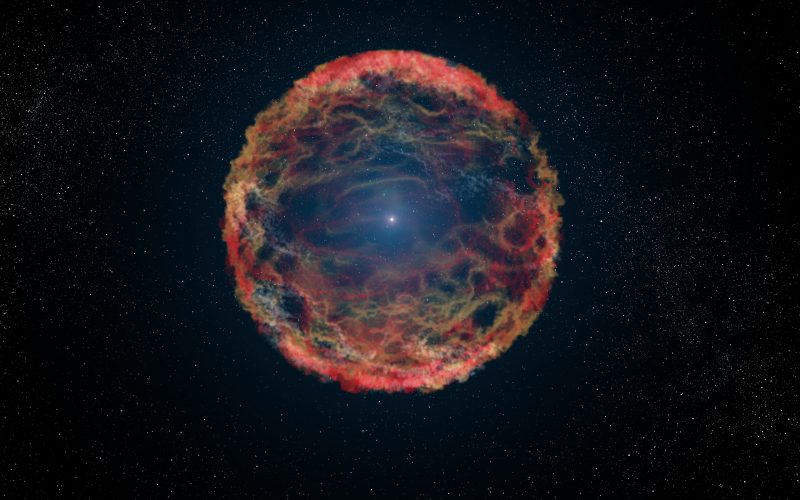 While the verses speak of the putting out of stars, the planets, that are not light sources, will scatter. The Arabic word for a star is “najm,” while “kavkab” is a planet. Given the fact that the planets are dependent on a central star, when this star is no more, the planets will necessarily scatter. (There have been translators who translated both words as stars without heeding the difference between them.) But when we look at the usage of these two words in the Quran, we think that such a distinction has to be made. Planets are not light sources, therefore their extinction is out of question. The Quran displays its miraculous attribute in all its statements.

The Arabic word “takwir” refers to the wrapping of the turban around the head in a spiral form; it also means the rolling or winding of a thing into a ball or round mass, or around something. The scene describes how the end of the sun will come. Like all the other stars, our sun also consumes hydrogen atoms by transforming them into helium atoms and releasing energy in the form of radiation, heat and light. The transformation of hydrogen into helium stops with the exhaustion of the hydrogen. Even without the effect of other potential causes, the sun will have to come to an end for this reason. Before their extinction, the stars, according to their sizes, pass through such phases as red giant, white dwarf or black hole. In view of its magnitude, our sun must turn first into a red giant before dying.

7- And verily the Hour is coming, no doubt about it,
and that God will resurrect those who are dead.
(22- The Pilgrimage, 7)

The description of the end of the universe in the Quran relating to the end of the sun and of the world is given in striking colors. What the people at the Prophet’s time knew about astronomy could not possibly have permitted them to describe such occurrences. Muslims who lived at the time of the revelation of the Quran believed in all these, not because of scientific deductions but because they had faith in the fact that it was easy for God, the Creator of the heavens and the earth, to destroy them. All the statements of the Quran about the disappearance of the stars, the sun and the earth are corroborated today by scientific discoveries.

When the Hour comes, the entire earth will be shaken by a terrible earthquake. The Quran says that the tremor will cause mountains to be pulverized, and men will run to and fro in panic. As for the sea, we have the following indications:

When the seas are suffered to burst forth.
(82- The Shattering, 3)

An earthquake will pulverize mountains, hot lava will burst forth from many corners of the earth. Volcanoes will erupt and lava will rise from the sea. It is unlikely that the depiction of the end of the world was an exaggeration of natural disasters that Muhammad experienced in his lifetime. The area where Muhammad lived was not on a major earthquake fault-line and those who spent most of their lives in the middle of desert, most likely, never witnessed the eruption of a volcano in mid-ocean!

The Quran draws our attention to the herding together of animals. We know today that animals react to a tremor even before we, as human beings, realize it. This is a domain in which further research studies are being conducted.

The contents of the earth, the magma, the molten rock, will rise to the surface as lava, as described in the verses quoted.

The Quran would like us to turn our attention to the most serious event of earth history to come. Advanced science has demonstrated that the end of the world and the universe is inevitable. No one can assert any longer that the stars and the sun will shine forever, and that the universe and the earth will abide to eternity.

18- Are they waiting until the Hour comes to them suddenly?
Its signs have already appeared.
How can they benefit then when it has come upon them?
(47- Muhammad, 18)

The end of the universe and of the world is the most serious event next to its formation. Riches, reputations, situations, families, beauty, ugliness, joy, distress will be no more. Superiority will no longer be measured by riches, possessions and high offices. Now, “superiority” will depend on the sort of life man has led. From the scenery of the end of the universe and the world described in the Quran, there are lessons to draw in this life of ours. All these are not for the mere sake of knowing. What is communicated has as its objective to move people and guide them to God. We must bear in mind the third verse of the 56th sura:

Tags: death of stars, end of sun, end of universe, the time of the judgement day

3 Replies to “DEATH OF THE STARS AND THE SUN”