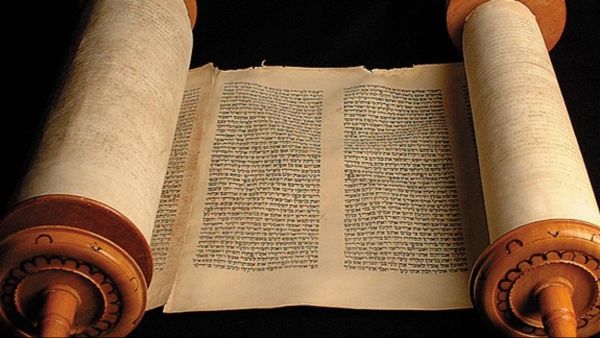 In this chapter, we shall be studying the implications in the Old Testament made to the Prophet, to the region where he lived and to the message he brought. The greater part of our book has so far treated such subject matters as physics, chemistry, geology and biology. Also we have tackled, in a separate category, philosophical speculations, and in another separate category archaeological issues. Now we shall be dealing with those parts of the Old and New Testaments that are of special relevance for our present study. Questions that have found answers in the natural sciences, based on observation, were followed by ratiocination in the chapters on philosophy and were followed by historical data calling for detailed analyses in the chapters on archaeology. Now we are to tackle the veracity of information contained in the Bible. According to the Quran, Jews falsified their scriptures by changing the context and meaning of words. This misled the commentators in their interpretations of the signs heralding the advent of the Prophet:

46- Some among the Jews distort the words out of context and
say with a twist of their tongues…
(4- The Woman, 46)

41- They change the words from their right places and say “If you are
given this, accept it, but if you are given anything different, beware.”
(5- The Feast, 41)

The fact that Jewish rabbis have tried to misinterpret the signs related to Islam dates from the time of the Prophet. There is reference to this in the verse quoted at the head of the present chapter.

ALL PROPHETS HAVE PROFESSED ISLAM

The Quran accepts that all the prophets descending from Adam are Muslim (submitter). The word “Islam” has also the connotation of “peace.” The Jewish word “Shalom” and the Arabic word “Salam” stem from the same root.

As for the prophet who prophesies peace (shalom),
when the word of that prophet comes to pass, then it will be known
that the Lord has truly sent the prophet.
(Jeremiah 28, 9)

The word “peace” in this translation has the same root as the word “Islam.” The two prophets, Christ and Muhammad, who came after Moses, announced 1) that there was one God; 2) to worship only one God; 3) to believe in all messengers of God; 4) that man was to believe in the Day of Judgment; 5) that man should lead an honest life, 6) that man should not kill his kind or commit theft, and 7) that man should protect the needy and the orphans, etc. According to the expressions used in the Old Testament, the proof of prophethood was the message’s containing peace (Islam) and the prophet’s words turning out to be true. Thanks to the message brought by Muhammad, billions of people have believed in what he said and have loved God and believed in the Omniscience and Omnipotence of God and that the truth of the revelations in the Book transmitted by him came to be demonstrated by the ensuing historical events and developments in science. Nowhere in the Old Testament can we come across a statement to the effect that Moses is the last prophet. Someone who believes in the Bible can easily deduce from its contents the evidence of Muhammad’s prophethood. Moreover, the Old Testament’s criterion for the recognition of a prophet was his coming with the prophecy of peace, i.e., Islam in its etymological sense, which word came to be integrated with the name of Muhammad.

6- For thus says the Lord of Hosts: “Yet, once more, in a little while, I will shake the heavens and the earth and the sea and the dry land.
(Haggai 2, 6 )

7- And I will shake all nations so that the treasures (himada) of all nations shall come in, and I will fill this house with glory, says the Lord of Hosts.
(Haggai 2, 7 )

The Hebrew word “himada” mentioned under verse 7 of Haggai stems from the same root as H-M-D in the Arabic language which is the root of the name “Muhammad,” carrying more or less the same meaning. Thus the name of the Prophet or the meaning of his name is mentioned with reference to a glorious event that was to take place in the future. What can be a more glorious event than the advent of Muhammad -who came after the Old Testament- and whose message announced God’s existence to billions? Remember that the word “shalom” (peace) in verse 9 comes from the same root as the word “Islam.”

18- I will raise up for them a prophet like you from among their brothers. And I will put my words in his mouth, and he shall speak to them
all that I command him.
(Deuteronomy 18, 18)

19- And whoever will not listen to My words that he shall speak in
My name, I myself will require it of him.
(Deuteronomy 18, 19)

In Deuteronomy the coming of a new prophet is predicted. Christians claim that reference is here made to Jesus Christ. However, Muhammad, in many respects, was more like Moses and had many more common traits with him than with Christ. It may be that both Jesus Christ and Muhammad were meant. Only God knows the exact reference.

On the other hand, being of Jewish descent, it is quite possible that Jesus Christ was meant, although Arabs and Jews had common ancestors. Michael Hammer, from the University of Arizona, Tucson, in collaboration with some colleagues from the University of Israel, examined 18 divisions in the Y chromosomes of 1371 persons who came from 29 different communities. Among these were European Jews, Latinos, people from North Africa, Kurds, Iranians, Yemenis and Ethiopians, Palestinians, Lebanese, Syrians, Israeli Durzis, Saudis and 16 non-semitic groups. The studies conducted have shown that Jews from different origins and Arabs descended from a common stock. This is in accordance with the belief that Abraham is the common ancestor of Jews and Arabs.

If we may be allowed to go back to Deuteronomy, it is easy to establish the many traits Moses had in common with Muhammad, rather than with Jesus Christ. Moses, like Muhammad, established a realm. The Christians’ realm was realized after Christ’s death.

Knowing that prophets transmit messages bearing common traits, it is difficult to decide whether this prediction refers to Christ or Muhammad. But still we would like to draw attention to the 18th and 19th verses of Deuteronomy. It is stated that the future prophet will be talking in the name of God. One of the distinguishing characteristics of the Quran is that 113 out of 114 suras start with “In the name of God, the Gracious, the Merciful.” This feature of the Quran corresponds with the statement of Deuteronomy.

ORIGIN OF THE PROPHET

1- This is the blessing with which Moses, the man of God, blessed the people of Israel before his death.

2- He said: “The Lord came from Sinai and dawned from Seir upon us; he shone forth from Mount Paran; he came from the ten thousands of holy ones with flaming fire at his right hand.”

Moses’ prayer just before his death is interesting. The place referred to as Sinai is where Moses had emerged; the second place, Seir is the place where Jesus came from; while the third place is the Paran Mountains and it is the place where Muhammad came from. Thus, in the Biblical statement quoted above, allusions are made to the monotheistic religions which had an outstanding influence on humanity. Here we also see the corroboration of the prophets to come, viz. Jesus and Muhammad; just as the Quran corroborated Moses and Jesus as prophets, so had the Old Testament done this. The prediction in Deuteronomy that the Prophet would come among the ten thousands of holy ones is a remarkable indication because while Muhammad was living, he had ten thousands of followers.

Accounts related to future events in Isaiah make allusions to Muhammad as Prophet. Accounts related to the future in the Old Testament are in perfect conformity with Muhammad’s ways, in that he broke the idols (8), that he established justice upon earth during his lifetime (3 and 4), that he received the message from Gabriel, the Holy Spirit (1), had ideal ethical values (2 and 3), shed light over the souls of men who had been blinded (6 and 7), carried over new messages he had received to mankind (10), and was a descendant of a community that had descended from the line of Kedar (11).

1- Behold my servant, whom I uphold, my chosen, in whom my soul delights; I have put my Spirit upon him; he will bring forth justice to the nations.

2- He will not cry aloud or lift up his voice, or make it heard in the street.

3- A bruised breed he will not break, and a faintly burning wick he will not quench; he will faithfully bring forth justice.

4- He will not grow faint or be discouraged till he has established justice in the earth; and the coastlands wait for his law.

5- Thus says God, the Lord who created the heavens and stretched them out, who spread out the earth and what comes from it, who gives breath to the people on it and spirit to those who walk in it:

6- I am the Lord; I have called you in righteousness; I will take you by the hand and keep you; I will give you as a covenant for the people, a light for the nations.

7- To open the eyes that are blind, to bring out the prisoners from the dungeon, from the prison those who sit in darkness.

8- I am the Lord; that is My name; My glory I give to no other; nor My praise to carved idols.

9- Behold, the former things have come to pass, and new things I now declare; before they spring forth I tell you of them.

10- Sing to the Lord a new song, His praise from the end of the earth, you who go down to the sea and all that fills it, the coastlands and their inhabitants.

11- Let the desert and its cities lift up their voice, the villages that Kedar inhabits; let the habitants of Sela sing for joy, let them shout from the top of the mountains.

A careful study of these verses may suggest to their reader that allusions to Muhammad are plain. What is still remarkable is that these statements would turn out to come true. This prediction was not made for the time of Isaiah but for later, as mentioned in verse 9. It is interesting to note that in the 17th verse of Isaiah it is said that idolaters would be put to shame, an event that had come true by the revelation of the Quran.

71- O people of the Book! Why do you clothe the truth with falsehood,
and conceal the truth, knowingly?
(3- The Family of Imran, 71)