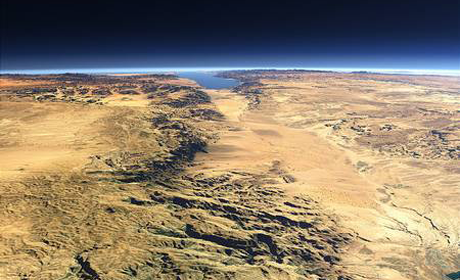 3- In the lowest part of the earth.
But after defeat they
will soon be victorious.
(30- The Romans, 3)

4- Between three or nine years.
God’s is the imperative first and last.
On that day the believers will rejoice.
(30- The Romans, 4)

At the time of the descent of the Quran, the Romans were practicing Christianity while the Persians were Zoroastrians. The Muslim population was grieved to hear that it was the Persians who had won the war against the Romans since Christians were monotheists. The victory of the Zoroastrians against the believers baffled the Muslims. The Quran predicted that the Romans (Byzantium) would soon become victorious and that the believers would rejoice. The expression “beda seneen” in verse 4 refers to the numbers ranging from three to nine.

The number of followers of Muhammad continued to increase. Had this statement of the Quran proved to be wrong, the confidence of the followers in Muhammad would have been shaken and the number of apostates would have grown. For a person not firmly convinced that the Quran was the revelation of God, such a prediction would be fatal for the system. If such a prediction were to prove false, it would have lost more of its authority than it would have gained had it turned out to be true. But it was God who revealed the Quran. So there was no risk. Thus the confidence of the followers increased even more.

Yes, self-confidence, daring and categorical prediction! This is either a proof of wisdom or the foolhardiness of the ignorant. The result indicates which was which. Those who doubt that this was not a revelation from God may conclude that it was guesswork, without considering the consequences that would put everything in danger. Something difficult was being heralded. A nation that had lost its cause was promised a triumph in a subsequent conflict.

Had this prediction turned out to be false, the believers might have lost faith and given trump cards to the hands of the opponents of the faithful. It is in fact the truth that eventhough unbelievers accused Muhammad of being insane, a sorcerer or a self-seeker, no one has ever accused him as being a “liar!” The unbelievers were badly in need of such accusations. It was certainly more difficult to attack the Prophet and his followers with daggers drawn. If the people who attributed partners to God were able to come forth with such evidence, they would prefer to use it rather than wage wars. So all the predictions of the Quran came true and no objections could ever be raised by the unbelievers.

Nevertheless, there have always been and will be people who turn a blind eye and a deaf ear to the revelations of the Quran. This did not prevent the Quran from eventually becoming the sovereign power of the region under the domination of the Prophet during his lifetime.

YOU WILL CONQUER MECCA

27- Truly God fulfilled His messenger’s vision. You will enter the Restricted Mosque in security, if God wills. You will cut your hair or shorten it, you will not have any fear. Since He knew what you did not know, He has preceded this with an immediate victory.
(48- Victory, 27)

Another prophecy similar to the victory of the Romans was the realization of the premonitory dream of Muhammad in which he saw himself entering the Restricted Mosque (the mosque which surrounded the Kaaba of Mecca, the place of pilgrimage). Just to remind you, the Prophet and his followers had been expelled from Mecca and the Meccans were superior both in military power and equipment.

Many prophets died before they could establish sovereignty in the land in which they spread their religion. Had there been no such tidings, Muhammad could not possibly have foreseen that the day would come when he would be in a position to conquer Mecca.

All Quranic verses reflect poise, confidence and self-reliance. There is nothing in them to suggest the ambivalence, vacillation and equivocation that one can encounter in a man-written book.

89- …We have sent down to you a Book explaining all things, a guide,
a mercy and glad tidings for those who submit.
(16- The Honeybee, 89)

8- And the horses, the mules and the donkeys for you to ride and for splendor. Additionally, He creates what you do not know.
(16- The Honeybee, 8 )