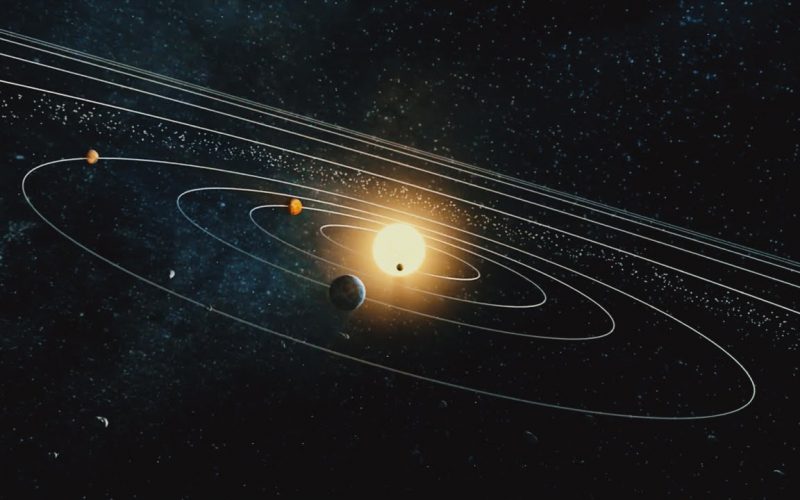 The word we translated as “each of them” is “kullu” in Arabic. Suffixes called “tasniya” are used in Arabic when the sentence defines two objects. In the verse reference is made to the motion of two celestial bodies, namely the sun and the moon. However, the reason why “tasniya” is not used indicates that there should be more than two objects. If we suppose that the night and the day take place on the earth, the other object should be the earth. The Arabic word “falak” is used in Arabic to denote the orbit traced by stars and planets.

THE MIRACLE IN THE USE OF EVERY SINGLE WORD

As one can see, every single word and suffix has been carefully selected. The Arabic equivalent of the expression “to float” is “sabaha.” Maurice Bucaille says the harmony of the movements of the sun, the moon and the earth can be expressed as follows: “The Arabic verb ‘sabaha’ refers to displacement of an object by its own movement. The meanings of this verb converge on displacement referring to the motion of the object by itself. When displacement takes place in water, the movement refers to the act of floating; when it is on land the displacement takes place by the movement of the object’s own legs. If, on the other hand, this displacement occurs in space, the motion intended can be described only by the etymological sense of the word. Thus, ‘sabaha’ should be conceived as a motion in a self-generating act. The moon rotates around its axis within a space of time equal to its revolution around the earth; that is 29.5 days. So what we see is always the same face of the moon. ‘The sun turns about its axis within 25 days approximately. The word ‘sabaha’ describes the self-generating motions of the sun and the moon conforms to the findings of recent scientific data. This fact could not have been fancied by a human being in the 7th century, regardless of his erudition.”

The motions of the sun and the moon and the earth continue without the slightest interference with our life. On the other hand, all the phenomena are brought about to make life on earth and diversity possible. The earth revolves about the sun, at an angle of inclination of 23 degrees and 27 minutes. The seasons evolve upon the earth thanks to this inclination upon which depends also the system of growth of plants.
The velocity of rotation of the earth about its axis attains 1670 km. If the earth did not rotate, its surface facing the sun would be exposed to continuous light while the rear would be in perpetual darkness. In such a world, neither vegetation nor beings could exist.

40- Neither can the sun overtake the moon, nor does the night precede the day.
Each of them is floating in an orbit.
(36-Ya-Seen, 40)

All the motions of the sun, the moon and the earth continue in perfect harmony. Everything is so excellently arranged that even Jupiter, the largest planet in the solar system, contributes to the life on earth. Astronomer George Wetherill, in his article on Jupiter, says that had there been no planet of a magnitude equal to the size of Jupiter, the earth would have had much more exposure to stray meteors and comets, and that if Jupiter were not at the place where it happened to be, we could not have been here now to probe into the mystery of the origin of the solar system. No matter where we turn, we come across splendors, infinitesimal calculations and works of art provided. Of course, we meditate on God’s creation using our intelligence. Our Creator displays the evidences of His omnipotence and omniscience and His compassion everywhere in the universe.

190- Surely, in the creation of the heavens and the earth,
and the alternation of night and day, there are signs
for those who possess intelligence.
(3- The Family of Imran, 190)

191- They remember God while standing, sitting, and lying on their sides.
And contemplate on the creation of the heavens and the earth:
“Our Lord, You did not create all this in vain. Be You glorified.
Protect us from the torment of the fire.”
(3- The Family of Imran, 191)

4 Replies to “ALL AFLOAT IN ORBITS”