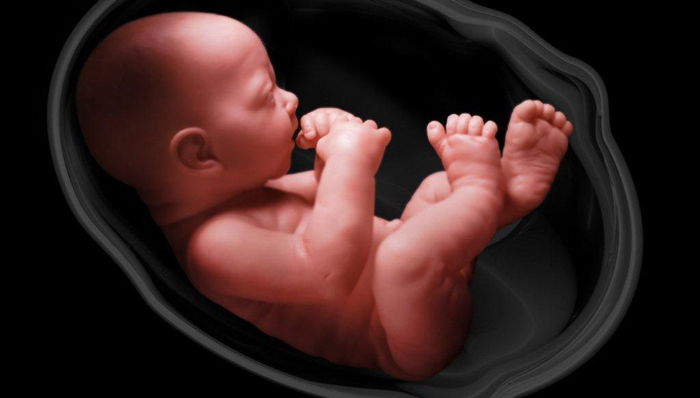 With the level of knowledge at the time, this information could not have been available. The fetus continues to develop in the dark of these three regions. The amniotic sac contains a fluid that fills the amnion to protect the embryo from desiccation and shock. This substance is a kind of cushion that absorbs shocks, balances exerted pressures, prevents the amniotic membrane from adhering to the embryo and enables the fetus to change position in the womb. If the fetus could not easily move in the said fluid, it would remain idle as a mass of flesh and would likely suffer injuries leading to various complications. Equal distribution of heat enables the fetus to be at a constant temperature: 31°C. We observe that our Creator has designed everything perfectly in its minutest detail, satisfying all the requirements of our body and protecting it against the dangers lurking in the outside world.

FROM ONE STAGE TO ANOTHER

It was also said that verse pointed to the fact that during the stages of creation we passed through three different phases of development. According to this view the three veils of darkness refer to:

1- The fallopian tubes: The sperm, having fertilized the egg, proceeds on along the fallopian tubes. The zygote during this journey begins to divide and reproduce itself.
2- The uterine wall: The stage during which the embryo hangs on the wall.
3- The amniotic sac: The sac fills with a fluid that surrounds the fetus. The next step of evolution calls for a longer period of development in this sac.

A glance at the outward aspect presents a uniformity of sight. But were we to shrink to the size of a tiny cell and explore the environment, we would see how different these chambers were. The first dark space reminds us of a monumental tunnel. The second compartment is a dark forest where no light penetrates, and the third compartment reflects the dark depths of the sea.

As we can see the Quran describes either 3 intertwined layers or 3 consecutive dark spaces. God knows whether the reference is to one or to the other. (We think that the first ternary separation we did is the fundamental indication of the verse.) And in addition there are three stages through which the embryo evolves.

The three stages in question are:

1- The pre-embryonic stage: This stage is called the “first trimester.” As the cells multiply, they get organized in three layers; this process takes two weeks.
2- The embryonic stage: Basic organs begin to emerge from the cell layers. This stage is referred to as the “second trimester” extending from the second week to the eighth week.
3- The fetus stage: The face, hands and feet appear and the human figure is formed. This is the “third trimester” that extends from the 8th week until birth.

Our shaping up takes place in stages, in each of which new evidences emerge. Data relative to embryology have been acquired only in the recent past. Neither before the descent of the Quran, nor in the course of the millennium succeeding it can you find such information available. The Quran indicated the composition of the semen, from a drop of which man was created. The Quran coined names that describe the development stages of the embryo; namely hanging to the wall of the womb (alaq), succeeded by the chewed lump of flesh (mudga). Thus the Quran uses terminology based on the positions the fetus assumes. Again there was no source before the Quran which asserted that the muscles were made after the formation of bones.

To assert a scientific fact, a scientific background is a must. It is on such a foundation that other data can rest, which, in turn, calls for advanced microscopes and micro cameras. At the descent of the Quran, there was no such scientific background or such instruments. Nobody of sound mind can come forward and say that the information in the Quran was a result of fortunate coincidences.

35- Were they created of nothing or were they themselves the creators?
(52-The Mount, 35)