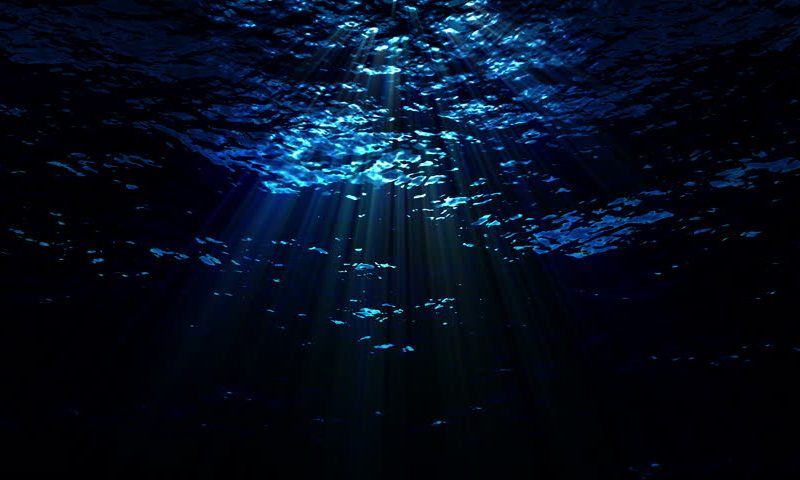 40- Or is like the darkness in a deep sea. It is covered by waves,
above which are waves, above which clouds. Darkness, one above another.
If a man stretches out his hand, he can hardly see it. For any to whom
God gives not light, there is no light.
(24- The Light, 40)

The construction of submarines dates back to the 17th century. A vessel that navigated under water was first invented in 1620 by C. Drebber. Submarines developed rapidly, and in 1954, nuclear submarines were built. The development of submarines made possible the study of submarine geology and topography, and life in the depths of oceans. Collection of data had been possible thanks to the means developed in recent centuries without which a man could not have dived to a depth more than 50 meters.

At a depth of 200 meters from the surface of the sea, darkness reigns. At this depth, “If a man stretches out his hand, he can hardly see it,” as described in the verse. It wouldn’t be wrong to define a depth of 1000 meters from the surface of the sea as the darkest place on earth; pitch dark. While broad daylight reigns on the surface, 200 meters below it is completely dark. At the time of the descent of the Quran, there were neither scientific data nor knowledge based on observation about the darkness reigning in the depth of seas. Just as the Quran told about many aspects of heavenly phenomena not comprehensible by man without the help of satellites, it also provided information about submarine life in the depth of seas and oceans hardly accessible to man without submarines and instruments. The Quran – whose range of information is vast enough to cover everything, from the space high above down to the depth of the seas – itself proves its divine origin by the very fact that it is flawless.

In general, we have the impression that the wave only breaks on the surface and that the water underneath is calm and still. That is why the expression in the Quran, “by waves, above which are waves,” may seem puzzling. These waves were discovered in 1900 and are as described in the Quran. The dark depth of the sea contains these waves topped by the waves on the surface.

In the verse, we also observe the motion of light. The sun’s rays are refracted as they strike the clouds and lose some of their luminescence. The rays that reach the surface of the seas diffract as they continue their journey in the spectrum, the first layer holding onto the yellow, while the second holds onto the green; in the last layer, the seventh in fact, the blue disappears. Thus, as the journey goes further downward, light vanishes. The sunlight refracted in the clouds, the light that vanishes in the levels of oceans, completely disappears in the depths of oceans and cannot light the bottom. Not even fish can see their way unless they themselves generate some form of light.

6- Say: “The Quran was sent down by Him, who knows the mystery that is
in the heavens and the earth: verily He is Forgiving, Merciful.”
(25- The Distinguisher, 6)