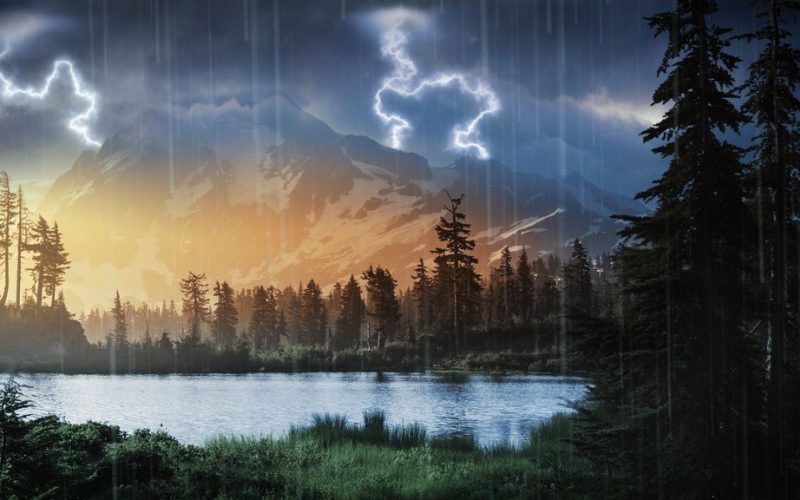 The Arabic word “raj” means “to return, to turn.” Rain is a prerequisite for the perpetuation of life on earth. The water that the sun’s rays cause to evaporate does not disappear into space. Rain and water also returned to earth at the time of the Prophet, but scientific knowledge to explain the process was lacking. Once the layers of the atmosphere came to be differentiated, it was understood that the Troposphere, which is one of these layers, prevented the escape of vapor into space and contributed to the perpetuation of life on earth. This layer sends the condensed vapor back to earth in the form of precipitation.

Most of the phenomena that we have studied during our examination of the verse and in which the sky was likened to “a well protected roof” occur thanks to the sky’s return of certain things. The sky protects our world by sending back the radioactive particles, radiation and harmful ultraviolet rays coming from the space. While it reflects back to space what is harmful for man, it prevents the evaporated water necessary for life on earth from leaving the atmosphere. The Quran’s reference to this characteristic of sky, explored only in the last century, cannot be explained by the lore of the contemporaries of the Prophet.

If the atmosphere had not been endowed with this capacity, the maintenance of a desired temperature to foster life on earth would be impossible. Life is possible only within a narrow temperature bracket. In the spectrum of heat ranging from the temperature in the sun to absolute zero, life thrives only in a span of less than 1%. Once attained, maintenance of this 1% span is difficult. A sudden fall and rise in temperatures would also be deadly. For instance, when we feel comfortable, say at an ambient temperature of 20 degrees Celsius, if we witness a sudden increase of temperature, rising as high as 100 degrees Celsius or if there is a sudden fall to -100 degrees Celsius, destruction would be imminent. The atmosphere’s returning power maintains stability.

The composition of the atmosphere is as follows: 78% nitrogen, 21% oxygen and 1% carbon dioxide plus other gases. These rates are ideal for life on earth. If, for instance, the proportion of oxygen rose from 21% up to 22%, the chance of lightning likely to start a forest fire would increase by 70%. Had the oxygen and nitrogen rates in the atmosphere been in excess of what they actually are, vital functions gaining momentum would be to the detriment of life. Had these been inferior, these vital functions would sensibly slow down again, causing great damage to living beings. The steady maintenance of these rates has been possible by a series of phenomena of which the atmosphere’s property of reflection is but one; but the lack of this one characteristic would be fatal. Who would claim that this perfect umbrella immune to all adverse circumstances was a fortuitous event? Who would assert that our being protected and well guarded is the result of happy coincidences that duly perform their duties in keeping for us the water and the air vital for our survival? Our Creator has beyond doubt designed everything to serve its purpose before infusing life to us. The Quran He has sent was meant to enable us to behold His wonderful creation.

27- Not without purpose did We create heaven and earth and all between!
Such is the thinking of those who disbelieve.
(38- Sad, 27)