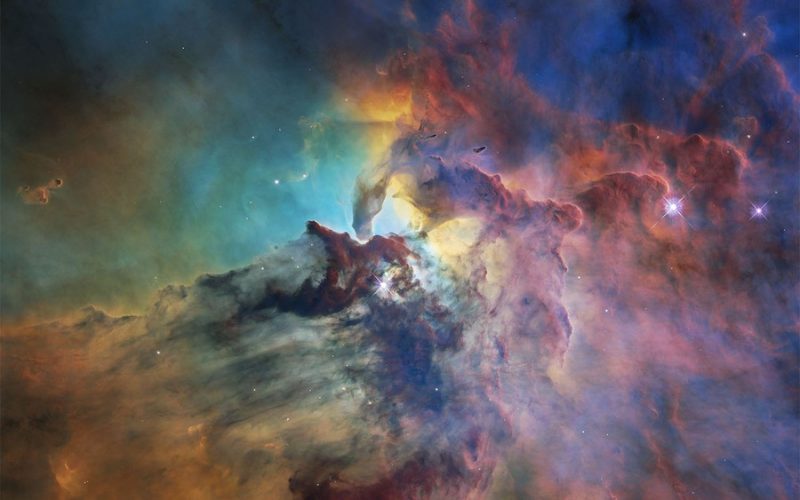 11- Then He turned to the heavens, and it was in a gaseous state.
And said to it, and the earth;
“Come into existence, willingly or unwillingly.”
They said, “We come willingly.”
(41- The Elucidated, 11)

“Dukhan” is the word used in Arabic for smoke, vapor and gaseous matter. It appears that the universe was a gaseous mass before it reached the state – by the will of God – from which the universe and the earth came to be.

We know that our world, the sun and the stars were not formed immediately after the primeval explosion. For the universe was in a gaseous state before the formation of the stars. This gaseous state was initially made of hydrogen and helium. Condensation and compression shaped the planets, the earth, the sun and the stars that were but products of the gaseous state. The discovery of these phenomena has been rendered possible thanks to successive findings as a result of observations and theoretical developments. The knowledge of all contemporary communities during the time of the Prophet would not suffice for the assertion that the universe had once been in a gaseous state. The Prophet himself did not claim to be the author of the statements in the Quran as it often reminded, declaring that he is simply a messenger of God.

49- This is news of the unseen which We reveal to you,
which neither you nor your people knew before.
So, be patient. Surely the end is for the dutiful.
(11- Hud, 49)

VOLATILE GASES TO ONE DAY BE TRANSFORMED INTO MAGNOLIAS

It is evident that the aim of the scientific miracles expounded in the Quran was not only to perform miracles, or to teach us some scientific facts. The knowledge provided by the Quran is of paramount importance. The Book focuses our attention on the ingenuity of the creation full of marvels. The fact that it miraculously predicted events, the knowledge of which was unattainable at the time of the revelation of the Quran, is not the only important point. It also provides consequential knowledge. Take for instance the sura “The Elucidated“, verse 11: the fact that the Quran revealed 1400 years ago that the universe was previously in a gaseous state is a miracle. But the fact that the universe was not confined to its original state, but expanded in the wake of the primeval explosion and from this there emerged – within the framework of laws imposed by God – the stars, the planets, human beings and the magnolias are also part of His miraculous creation. In witnessing these miracles unfolded in the Quran we must not lose sight of the level of knowledge of the time and what is concealed behind the expressions.

We witness perfect operation of the physical laws in creation as the smoke of gas compressed formed the stars. Gravitational power caused the smoke to contract and the stars to be born, but the gravitational force does not go to extremes, and prevents the star from becoming a black hole. What can be the agent behind this process involving infinitesimal calculations, if not the Creator? Natural laws that encompass the entire universe also apply to the formation of stars. The objectives were targeted by the Creator on the eve of creation. Gravitation is not something intelligent and sentient and cannot be the author of all these formations. What a grotesque sight we would behold had the Creator had recourse to a chain to hold fast all the celestial bodies instead of the gravitation He devised. The problem was solved by His ingenious creation of gravity. Isaac Newton (1642-1724), who considered gravity the natural law imposed by the Creator, was the first scientist to discover laws of gravity. But neither he nor any other scientist could discover the fact that the universe was in a gaseous state in the beginning, neither before the revelation of the Quran, nor 1000 years afterwards. The sun that warms us, the blue oceans, the musical notes, the taste of our dishes have their origin in that gaseous state.