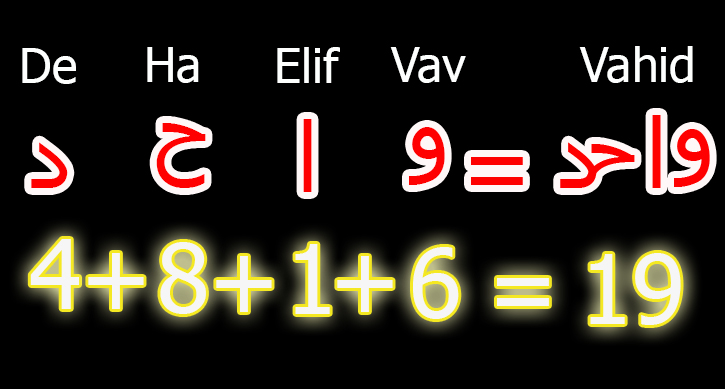 The basic message of the Quran is the unity of God. The unity of God is expressed by an Arabic word “Wahid” and the mathematical value of the word “Wahid” is 19. Let us explain what a mathematical value (GAMATRIA, ABJAD or ABCD) of a word means. Before adopting the Indian numeral system and improving it, at the time of Prophet Muhammad, Arabs used letters for both writing and mathematical operations. For example the letter “Alif” was equal to 1 in numerical value and the sound “Waw” was presented by the letter “w” and was equal to 6. As a result, “abjad” is not a technique that is used by the Hurufies or used in sorcery or in numerology as many people try to assert, but is, rather, a numerical system used in our Prophet’s time prior to the system we use today. You can see the mathematical equivalents of letters in Arabic below:

The word “Wahid” is written with the letters waw+alif+ha+dal, and the total numerical values of these letters are (6+1+8+4=19), as we have mentioned above.

The word “Wahid” whose mathematical value is 19, is used 19 times for God
in the Quran .The list of these verses is given below in the table.

Except for these verses, the word “Wahid” is used 7 times in the Quran, yet those uses do not refer to the names of God, but to objects, things like doors and eating materials.

The form “Wahiden,” derived from the word “wahid,” is used 5 times in the Quran, and it expresses God’s unity. However, “Wahiden” is written with an additional “alif,” and the mathematical value of this word is not 19. So only the word “Wahid” -the name of God whose mathematical value is 19- is used 19 times in the Quran. The total of all the forms of the word “Wahid” should not be multiples of 19 because only four names of God should be used as multiples of 19 (We will examine the reason for this in the following pages dealing with the four names of God in a symmetric table).